What’s the price for convenience?

How many times do you run into the convenience store to get milk or something and you know you’re paying too much, but you’re buying the convenience so you suck it up and pay the ridiculous amount. I have been having conversations with people lately that are paying too much for some of their decisions because they make their lives more convenient. I looked for the word convenience in three different bibles and it’s not in there. Isn’t that interesting? It appears that the Lord didn’t do any teachings that convenience is a part of.
I spoke to a woman one time that sent her kids to a daycare that wasn’t known for its great program but it was convenient for where she had to drive to work. Instead of looking at the fact that her children were surrounded ALL DAY by people that would influence their life and perhaps not take the best care of them she picked convenience. Another person told me they weren’t ready to end a relationship because the friend did a lot of favors for her that made her life more convenient. Rather than doing things herself she chose a friend that didn’t have her or her family’s best interest at heart for convenience. I took my son for a haircut one time and the lady that I usually saw wasn’t working so rather than come back another day I let a new woman cut his hair, it was convenient, however he got a terrible hair cut. You may be trying to lose weight or just eat healthier but at lunch time you go to a drive thru because it’s more convenient. Your husband rents a movie and it’s not something you really wanted your teens to watch but you do because it’s more convenient than fighting with the kids or worse yet going ALL the way back to the movie store and renting another movie. I think you catch my drift here. It didn’t seem like such a big thing to me at first but after talking to Jesus about it I realized it could be. I think convenience was created by the enemy to slowly rob us of the good choices we should make for our lives. I think that we have become lazy when making some important decisions.
I know it wasn’t convenient for God to send His only son to earth; it wasn’t convenient for Jesus to be raised by sinners or to be brutally beaten. It wasn’t convenient to be nailed to a cross by the very people He came to save. I have come to the conclusion that convenience is not in the Bible for a reason.
Don’t get me wrong I’m not saying it’s always bad to make a decisions based on the convienence. I guess as always I’m challenging you and me to ask ourselves, if I base a decision on convenience is it in the best interest of all parties. If the answer is no than what is the price I’m willing to pay?
I pray we will become men and women that don’t get sold out for convenience!
Posted by genasjewels at 1:00 PM No comments:

For you younger readers this was a jingle from a hair color commercial that said “I’m gonna wash that grey right outta my hair.”
With that said I’m going to tell you a story. I use to think of myself as a very generous person until one day it turned out I wasn’t. As you know every jewel applies to me and it’s kind of sad how much material I give the Lord.
I, like most of you are living by faith and think about every penny I spend. Being the vain woman I apparently am, I was concerned about the skunk streak making its way down the center of my head, another words my grey hair. 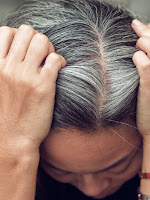 I could not justify buying hair color over milk but only because my thirsty child was standing next to me. A few days later my sister called to tell me she bought me four boxes of hair color that she got on sale. I was so excited! You would have thought I won a new car. I was praising the Lord for once again being the God of more than enough. I would have dark brown hair for the next four months and did not have to hold a grudge about buying silly things like milk and bread.
The first and second month went by without a hitch, the problem showed up on month three.  I was telling my roommate that it was time to color my hair and she said “I really need to color mine too.” I am not the only vain woman out there and this gives me comfort.
You can imagine what happened next. The Lord told me to give her my other box of hair color as we used the same one. You would have thought He asked me to give away a new car. I reminded the Lord that after I colored my hair I would only have one box left and if I gave it away I would have none.  I know, I was just as shocked as you are when I heard this conversation. I thought about it and came up with NO.
If she wanted to color her hair the same God that provided for me could do it for her. This was my spiritual justification. I was so overcome with guilt I told my teenage daughter about this selfish battle going on within me, she just looked at me and said “who are you?”
I could not believe I was holding out on my friend over a two dollar box of hair color!!

I didn’t bother to look in the bible for any scriptures to back up my greed I figured that was a lost cause. I thought about looking up scriptures for my roommate about the sick joke she was playing telling me she needed to color her hair too. I was onto her game; she wasn’t going to jack me out of a box of L'Oréal.

I realized I should have tried Matthew 6:3-4 When I give to the needy I do not let my left hand know what my right hand is doing, so that my giving may be in secret. Then my Father who sees what is done is secret will reward me.

Apparently someone else had this struggle too and decided not to talk about it even with themselves.
The shame and guilt was more than I could stand I stormed out of my room and practically threw the box at my friend. I said “here you can have it, color your hair, I don’t want it.”
My last hope was that she would fight me on this huge sacrifice and great gesture of sharing but she just smiled and said “thanks.”

I finally got a grip on myself and apologized to God for not being grateful that not only did He provide more than enough but He gave me the chance to bless someone else too. I claimed temporary insanity and was glad to get this greed thing out of my heart.

It’s funny that we can believe God for the big things in life and then get tripped up by something so small. Maybe it’s just a way to let off some emotional steam.
As always my Jesus is sweet to me and ended this conversation on a positive note, He said in
Psalm 34:10 "because I seek the Lord, I shall not lack any beneficial thing." ~  Even hair color!
Posted by genasjewels at 12:13 PM 1 comment: