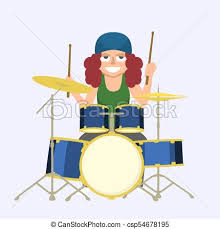 I was visiting a church service recently and was fortunate enough to sit in front of the drummer. I love the drums, when I get to Heaven I will know how to play the drums and I’m going to be awesome!

I was engrossed in the song as I followed the drummer’s hands, observing the results of him hitting each piece of the drum set in an order that made magical sounds. As I was watching him, I heard the Holy Spirit whisper “that’s how we do your life Gena.”

This of course got my attention and I asked what He meant? I still haven't learned to leave well enough alone.  He went on to show me that the drummer hit different parts of the drum kit to play different notes, but one drum he hit consistently was the snare drum (thank you Braxton Bisceglia for telling me what that was called).

In my life I’m never quite sure where I will live or what job I will be doing, but, the one consistent in every verse of my song is God. He sets the tone for the song and keeps me on beat as I walk through each assignment. The Lord sends me to different places meeting different people to compose a new melody. 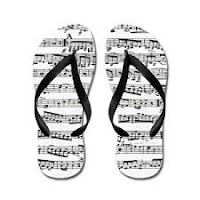 For instance, while I was in Tennessee part of my country song was to work for Nash Painting, it was here that I had the honor of meeting Linda! She is now my sister for life.
With this new song came the usual challenge of learning new computer software. If you know me at all you understand that is a HUGE undertaking for me as computers and I have a love hate relationship that leans more toward hate….

As always, I asked the Lord to open my mind and help me figure out the program so I wouldn’t have to constantly ask Linda questions over and over again. I was super surprised to see how quickly I was navigating the system. Little did I know that just a few short weeks into the job Linda would have to go out of town and I would be command central! WHAT! 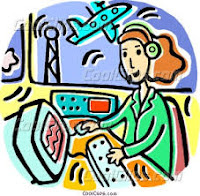 I had enough knowledge to be dangerous but not enough authority to completely screw things up. This allowed Linda to leave with one less thing on her mind. We were all playing our part and trusting God for the outcome.

I was a bit nervous about this solo but I knew as long as I stayed in beat with the Holy Spirit it would be OK.

During this cantata I was also bartering for a temporary place to live and to my surprise found myself tending chickens and goats at Stoney Creek Farm.
I never thought I would hear myself say things like “I need to get home before dark to feed the chickens.”  I wore a straw hat, mud boots and flannel to fit the part. 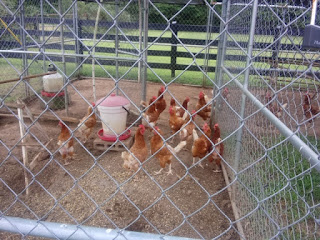 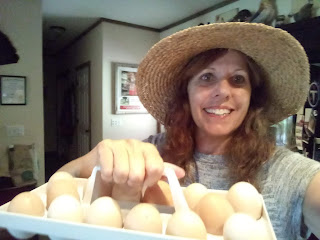 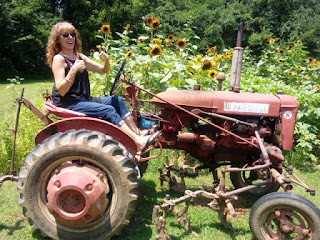 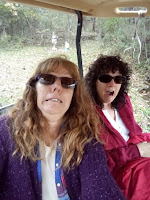 I neither confirm or deny getting the gulf cart stuck in a 2 inch creek after feeding the goats…..

If you’re ever in the Franklin TN area make sure to stop by this sustainable gardening farm and say hi to Leigh and Olin Funderburk.

I also played some spiritual tunes in Tennessee working part time as a prayer counselor for the Christian Broadcasting Network in Nashville.

In between all this I took a side gig in Mississippi and volunteered at Mitchell Farms Pumpkin Patch. Will work for food took on a whole new meaning, it was dark when I went to bed and woke up. I sold admission tickets, painted signs, picked up rotten pumpkins (actually I watched Beverly do that it was very stinky) helped with the corn maze 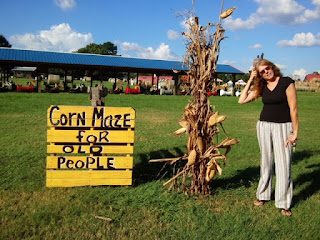 or whatever else needed doin at the moment.

It was a great experience spending time with the Mitchell’s and participating in pumpkin and peanut farm living.

After 7 months of TN drum playing the Lord was sending me back to Florida. My sweet friend Linda said “now that you worked for a painting company maybe you can find a job for another one back in Florida” to which I replied “I won’t get a job at a painting company because I hate to paint and won’t be applying to any.”
The only thing I painted at Nash Painting was my nails, don’t tell Bill.

Famous last words, I won’t work for a painting company.”
Little did I know the Lord had my next arrangement in place with Beverly Bakalyar Faux Finish Artist. I didn’t even know how to spell faux.

Now Gems this is where things get a bit crazy even for me. I go from Sweet Home Alabama to Bohemian Rhapsody!

I would soon embrace the title of “Highly Trained and experienced Gilder” along with facing my fear of heights in a tune called Beverly and her sidekicks. 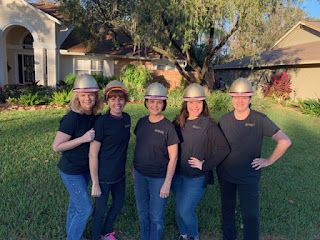 I knew I could handle the spiritual side of this instrumental, building relationships and praying for people, I could play that drum solo all day long, but the natural side was another story. I can’t even color in the lines and did I mention I hate painting and heights?

Lord how did this happen??? How did a hard hat and steel toed shoes become part of my wardrobe?

I arrived at the site ready to pray with the rest of my band who each would play the instrument God designed them for.  As I stood in the circle alongside this group of truly qualified women I reiterated to the Holy Spirit that unless we could use the “trunk” system (private joke for Betty Cardel)  I had no idea how I was going to pull this off.

Here I was day one being handed a paint brush and placed on a lift about 28 feet in the air!  Talk about playing the drums, my heart was beating so hard I WAS a snare drum! I hoped I wouldn't throw up as I threatened my coworker that if she made any sudden moves, I would inflict bodily harm to her. Swaying this high off the ground was not what I signed up for, to say I was terrified would be an understatement! How was I going to paint anything while holding on for dear life!

The Holy Spirit brought to my mind some verses from Exodus 31
“Then the Lord said to Moses, 2 “See, I have chosen Bezalel son of Uri, the son of Hur, of the tribe of Judah, 3 and I have filled him with the Spirit of God, with wisdom, with understanding, with knowledge and with all kinds of skills— 4 to make artistic designs for work in gold, silver and bronze, 5 to cut and set stones, to work in wood, and to engage in all kinds of crafts. 6 Moreover, I have appointed Oholiab son of Ahisamak, of the tribe of Dan, to help him. Also I have given ability to all the skilled workers to make everything I have commanded you: 7 the tent of meeting, the ark of the covenant law with the atonement cover on it, and all the other furnishings of the tent— 8 the table and its articles, the pure gold lampstand and all its accessories, the altar of incense, 9 the altar of burnt offering and all its utensils, the basin with its stand—10 and also the woven garments, both the sacred garments for Aaron the priest and the garments for his sons when they serve as priests, 11 and the anointing oil and fragrant incense for the Holy Place. They are to make them just as I commanded you.”

I began fervently praying that the Holy Spirit would supernaturally touch my hands and give me creative ability with artistic design just as He gave His other children. I knew that part of this musical was to play it with excellence not just for the company I was representing and the customer who hired us but for the Lord as well.

I was highly trained alright hovering over the earth where only birds belonged, however, in just a few short days, by the power of the Holy Spirit, I was living up to my title! I was painting and gold leafing too!!! 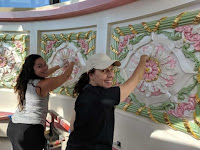 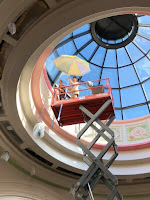 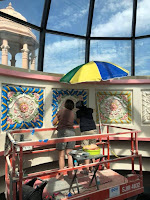 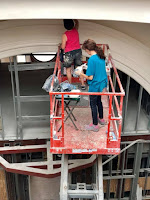 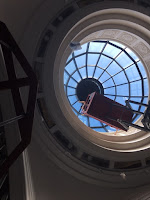 It was truly a miracle happening right before my very eyes!  My friends and family would say things like “I didn’t know you could do that” to which I replied, “I can do ALL things through Christ who strengthens me!”

Not only did the Holy Spirit train my hands He handled my fear of heights. I went from heart palpitations and almost vomiting to dancing on my lift we affectionately called Buster. 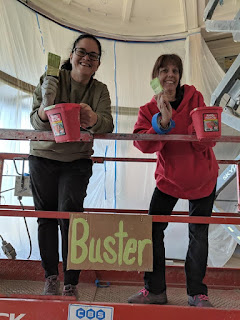 Gems the moral of the story is when the Holy Spirit puts you in a concert and requires you to write a new song, He will give you the ability to play all the notes. I'm never sure what the peace will be that He is orchestrating but I have decided I won't let fear make my decision on if I'm going to play. I would have missed out on meeting so many cool people and seeing awesome places if I quit the band. I hope this encourages you to keep playing your song.

For this concert, I learned all my lines and saw some of the fruit of my labor, the rest will be played when I get to my final symphony. 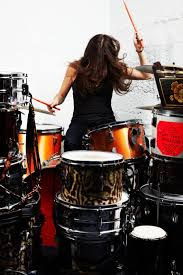 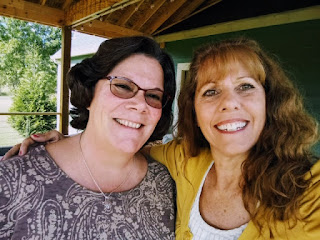 Posted by genasjewels at 3:18 PM 4 comments: